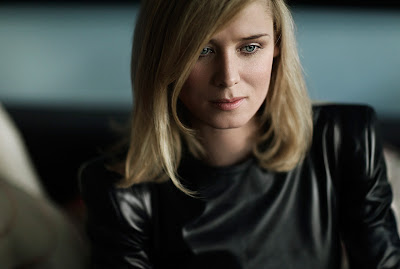 A lovely portrait of Roisin at home, courtesy of Rene Habermacher.
Posted by Hopeless Optimist at 13:55 18 comments:

Earlier today, this blog had its 500.000th hit since it started on 7 July 2007. Thanks to all Roisin devotees, for your continuous visits! If you wish to make a small donation, please request my PayPal details.

Goodnight my beauties!
Posted by Hopeless Optimist at 16:43 11 comments:

Roisin has spoken to Arjan Writes about her upcoming album, which she recorded in London and is currently in the process of being mixed. 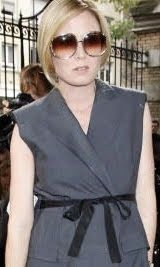 Arjan: Let's talk about your new music. Fans are anxious to hear what you have been up to. In an interview with the BBC recently you described the sound as more 'urban'.

Roisin: "It's tricky when you speak about it in that way, because honestly the record is still evolving. I'm still mixing and I have started to finish tracks now. A track like Demon Lover is very, sort of British urban sounding. And then I've done another track called Billionaire, which is more classic Roisin Murphy type of sound. I did that one which Seji who also produced Overpowered. Then there's some kind of old-school electro stuff that I've done. That's more straight-forward house stuff.

There's a lot of different things that I have been doing. I have been really creative. It has been a very creative period for me. It's feeling good, because I'm actually starting to mix. So the tracks are beginning to be finished, glossy and fabulous."

Click here to read the whole of Arjan's fabulous interview, in which Roisin also explains why the misquotations regarding Lady Gaga have bothered her so much.

--------------------
As a result of the Lady Gaga controversy, Roisin also spoke to the music blog Electroqueer. Here's what she thinks about going to London Fashion Week with a big belly:

"Right now I don't feel like a fashion icon. I feel very creative musically at the moment. I'm not being that visual at the moment in my music mode. It's very healthy for me though. If I come out at the end of the day in the studio and I've achieved something then that's good.

I know London Fashion Week is around the corner and I don't QUITE know how I'm going to approach it this season. I am pregnant. And that puts a different spin on my fashion choices. So we'll just have to see how that one works out!"
Posted by Hopeless Optimist at 13:43 13 comments: 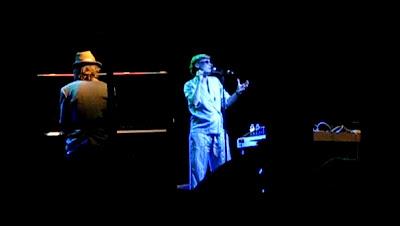 Roisin performing at the SWtmn festival in Portugal, looking pretty and happy to show off that she is a mother to be! (Source)

At the festival she also previewed a new song, right after Overpowered. View the video below to check it out...

Do you want to see Roisin perform live this summer? Your only chance is to come to Burlectic in London's SeOne club on Saturday 5 September.

In addition to Roisin, there is a DJ set from Razorlight along with burlesque performances, a fashion room with a carousel catwalk and a few more DJs.

Click here for more information and tickets.
Posted by Hopeless Optimist at 14:06 11 comments:

Roisin's publicist sent me an official statement by Roisin herself, in which she rectifies the Lady Gaga commotion. It goes to show one can never trust the tabloids, ever. And now, over to Roisin:

STOP PRESS! WHEN SHOULDER PADS CLASH!!: As far as I was concerned I was doing a short interview to promote, 'I'm Every Woman' a Charity record for ACTION AID and ended up getting myself into a tabloid trap. As the press are inclined to do, they have taken some comments I made completely out of context and completely fabricated others.

I NEVER said 'Lady Gaga is a poor imitation of me' That was a completely made up quote. I respect Lady Gaga's work as an artist and as a fellow fashion icon. She is a very talented performer, playing the piano, singing live and dancing too. I Don't Care about Shoulder pads! Not every female artist needs to be at odds with their contemporaries - I prefer to focus on the wonderful things happening in my life, which are plentiful.

I am a very honest person (which can often be problematic when it comes to doing press) but I am not a bitchy person. All the best to Lady Gaga - she is fantastic.

---------------
As Roisin sang in Pure Pleasure Seeker, a severe case of being "misjudged and misquoted". Please leave your comments! 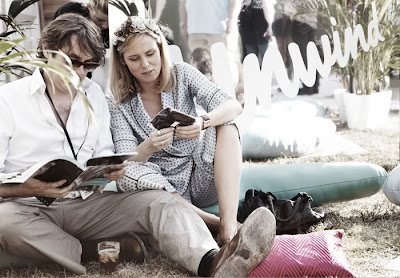 Okay Roisin devotees, I am quite ready to seek some shelter from the tea cup storm that Roisin's comments about Lady Gaga have caused. Are you too?

It's clear Miss Murphy is a bit annoyed by Gaga's copy antics and who could blame her for that? On a more positive note, let's also not forget that imitation is the sincerest form of flattery, as the saying goes.

Back to the order of the day! Betty sent me the great candid picture of Roisin and Simon above, taken backstage at the Wireless Festival in London last month.
Posted by Hopeless Optimist at 15:05 12 comments:

Roisin Murphy has spoken about the American pop singer Lady Gaga, who appears to have borrowed a few fashion ideas from Roisin.

One Irishwoman who will definitely be crossing her [Lady Gaga] off the Christmas card list is former Moloko singer Roisin Murphy. She recently claimed that the pop sensation stole her iconic look from her. The Arklow-born singer stated: "She has copied my style, she took my shoulder pads and all that. Mind you she doesn't wear the bottom half!"

I met her about a year ago before she got really big and I had no clue that this was all going to happen. She wasn't wearing shoulder pads at the time, and I was. Lady Gaga is just a poor imitation of me.

Let's see what bigmouth Gaga will have to say to that!
Posted by Hopeless Optimist at 16:05 35 comments: 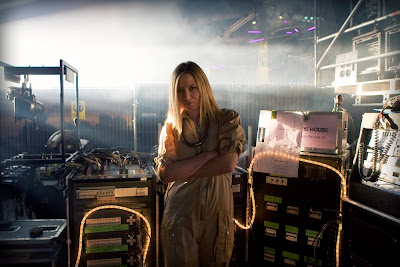 Yet another rare picture of Roisin. This time a portrait taken by photographer Bas Uterwijk, backstage at a concert venue in the Netherlands.

You know me only too well 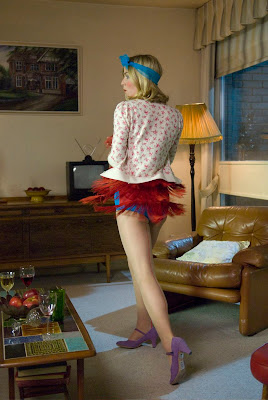 A rare picture from the You Know Me Better video shoot, a link to which was posted in the chat feature yesterday.
Posted by Hopeless Optimist at 14:56 2 comments:

All logos, images and pictures on this site are the property of their respective owners.